Govia Thameslink Railway (GTR) has been fined £1m with £52,267 costs after a passenger was killed when he put his head out of a carriage window on an express train..

Simon Brown, 24, sustained fatal injuries when his head struck a signal gantry near Balham in South London on 7 August 2016. The Gatwick Express to London Victoria was travelling at about 61 mph.

GTR, which operates the service, pleaded guilty to breaching section 3(1) of the Health and Safety at Work Act and was sentenced last month at Southwark Crown Court.

The “droplight” window was in a corridor on a door opposite a guard’s compartment. This door was accessible to passengers but was not intended for their use. Unlike other windows on the train, this one was not restricted from opening fully. 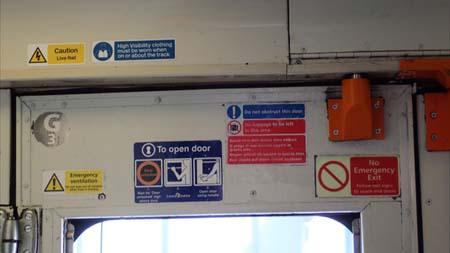 The warning sticker was in a ‘cluttered environment’ | Image credit: RAIB

An investigation report (bit.ly/2LSINIx) by the Rail Accident Investigation Branch (RAIB) said there was a warning sticker on the door above the window stating: “Emergency ventilation. Do not lean out of window when train is moving.” However, this was “secondary” to the wording about emergency ventilation and was placed in a “cluttered environment of other warning and information signs”.

“One of these signs, which is more prominent than the warning sticker, provides instructions on opening the door (including lowering the window to access the exterior door handle), despite the fact that this door is not intended for passenger use. Although there is a notice on the outside of the carriage that this door is ‘not for passenger use’, there is no such notice on the inside.”

The RAIB found no evidence to explain why Brown put his head out of the window. It concluded that there was nothing to prevent passengers opening the window or leaning out, and that the 260 mm distance between the train and gantry was “less than normal standard clearance”.

“The process for assessing the compatibility of this train on this route did not identify the risk of the combination of reduced structure clearances and opening windows.”

After the incident GTR fitted bars across the windows in such a way that it was still possible to lower the window, and therefore open the door when necessary, but it was not possible for passengers to position their heads outside the carriage.

The UK’s rail regulator, the Office of Rail and Road (ORR), which brought the prosecution, told the court that the risks associated with droplight windows should have been identified by a suitable risk assessment, and control measures introduced. However, GTR failed to take the appropriate action, it said.

It also revealed that there had been a similar incident in 2002, which resulted in enforcement action against train operator South Central.

Ian Prosser, ORR director of safety and the chief inspector of railways, said:

“There are still some trains with droplight windows operating on the network and we have written to operators instructing them to take immediate action to prevent a similar tragedy happening again.”