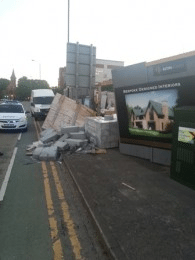 A Cheshire building company has been sentenced for safety failings at a building site in Altrincham where they were building residential houses and apartments.

Altin Homes Limited was running the building works at the former petrol station on Woodlands Road, Altrincham, Cheshire. The company was in control of all construction works and acted as client and main contractor employing numerous trade workers and labourers on site. The site first came to HSE’s attention in June 2014 following the collapse of building blocks across the pavement and cycle lane on Woodlands Road.

When HSE investigated the collapse of building blocks it was noted that there were other poorly stored blocks on site which were at risk of crashing through the hoarding for a second time. The company was told to remove them as soon as possible to reduce this risk.

The HSE inspector served two Prohibition Notices and two Improvement Notices, along with a Notification of Contravention during the first site visits.

Trafford Magistrates’ Court heard that some of the issues had been satisfactorily dealt with by Altin Homes following HSE’s first intervention but on a second visit a fortnight later, they had failed to remove the unsafe blocks which had caused the original incident. In essence they had ignored the recommendations of the inspector and had put their own workers and members of the public at continual risk.

Altin Homes Limited of Altin Court, 1a, Woodlands Road, Altrincham, Cheshire, WA14 1HG pleaded guilty at Trafford Magistrates Court to breaching Sections 2(1) and 3(1) of the Health and Safety at Work etc Act 1974 and Regulation 22(1)(a) of the Construction (Design and Management) Regulations 2007 and was fined £40,000 with £3,000 costs.

“Altin Homes Limited failed in their duty to protect their workers, subcontractors and members of the public passing by this site from a foreseeable risk of serious harm.

“Luckily no one was injured when the blocks fell through the site hoarding but, given the size and weight of the building blocks that fell onto the pavement and highway, there was the potential to cause serious injury or even death to both employees and the general public. It was nothing other than good fortune that no pedestrians were passing along the pavement when the blocks fell.”