Three construction firms were ordered to pay over £400,000 in fines and prosecution costs after a worker lost his arm when it became trapped in poorly-guarded machinery during a road surfacing operation in Hertfordshire. 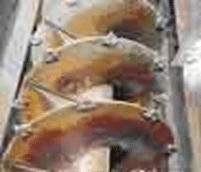 The 53-year old road worker was preparing a machine used to scatter stone chips on asphalt (chip spreader) for resurfacing works when his arm became caught in the rotating auger of the machine. The experienced workman had to have his arm amputated shortly after the incident and has been unable to return to work since.

Watford Magistrates’ Court heard (25 March 2015) that in order to prepare the chip spreader for use he started the machine and rotation of the auger. He repositioned the chip distribution hopper from kerbside to roadside to allow chips to be loaded. This operation involved moving the mesh safety guard from one side of the machine to the other.

He reached to move the guard and tripped falling forward towards the rotating auger thereby entangling his arm in the moving parts.

Series of safety failings on the part of all three companies

HSE investigators found no formal training in safe use of the spreader. Colleagues of the injured man were given one evening to familiarise themselves when they started work on site six months before the incident. Instruction or training in how to operate the machine safely was not given including how to secure guards and a copy of the machine operator manual was not provided

In addition, a safe system of work was not in place to ensure that the machine was set up and operated properly and use restricted to those who were trained.

“This tragic incident has left a worker with life-changing injuries. It was wholly avoidable. The risks associated with plant operating are well-known in the industry.”

“This incident highlights the need for workers to receive the information, instruction and training they need to operate plant safely and for companies to put in place measures to ensure the plant is operated safely on site.”