‘Urgent inquiry needed’ says Unite, as Firefighters confirm nobody was trapped under scaffolding which collapsed at the site of an old shopping centre in Reading. 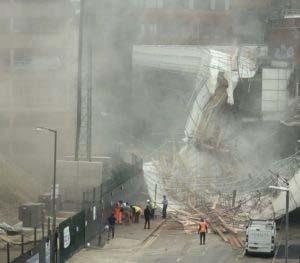 Firefighters used thermal imaging equipment to look for survivors, with Royal Berkshire Fire and Rescue Service confirming on social media that is ‘being supported by an Urban Search and Rescue Team (USAR) from Bucks & MK Fire’.

The incident occurred shortly after 11:15 on Thursday 1 August in Garrard Street. It has been reported three people, including a site worker and two passers-by, have been injured and taken to hospital with minor injuries.

Incident commander for South Central Ambulance Service, Tony Heselton, said the worker suffered a head injury. The other injured parties were a couple, one of whom suffered an ankle injury and the other was in suspected shock.

Upwards of ten calls were received to report the incident.

Royal Berkshire Fire and Rescue Service said that is sent five crews to the scene and advised the public to avoid the area.

The site, described locally as one of Reading’s ‘worst eyesores’, is being demolished as part of a major redevelopment in Reading town centre.

In order to learn the lessons from the collapse, trade union Unite believes that the HSE must swiftly undertake an open and transparent inquiry into the collapse.

“Everyone must be very grateful that the injuries reported so far have not been serious. If fatalities have been avoided, that is only through luck.

“A full inquiry must not just include the immediate reasons for the scaffolding collapse but also examine whether the work had been sub-let, were all workers on site properly employed, and did they all have the appropriate skills and training.

“It is essential that we learn the lessons from this accident to prevent similar serious incidents in the future.”