The owner of a building in Kent and the contractor employed to demolish it have been fined for safety failings after an uncontrolled collapse onto the High Street. 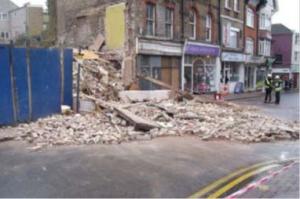 Canterbury Crown Court heard that the building at the High Street, Ramsgate, Kent was owned by Panther AL (VAT) Limited. Martin Elmes was contracted to undertake the demolition work.

An investigation by the Health and Safety Executive (HSE) into the collapse, which occurred on 6 November 2013, found that Martin Elmes had failed to properly plan the work and then carried out unsafe demolition work.

Panther AL (VAT) Limited (PALL) did not make any enquiries into the suitability or competence of Martin Elmes to undertake the demolition.

Neither PALL nor Martin Elmes applied for a road closure and members of the public were put at risk.

Panther AL (VAT) Limited, of Deneway House, Darkes Lane, Potters Bar, Hertfordshire, pleaded guilty to breaching Regulation 4(1) of the Construction (Design and Management) Regulations 2007, and was fined £160,000 and ordered to pay costs of £9128.89.

Martin Elmes, of Barnacres Road, Hemel Hempstead, Hertfordshire, pleaded guilty to breaching Regulation 25(1) of the Construction (Design and Management) Regulations 2007, and has been sentenced to nine months imprisonment suspended for two years.

“Lives were put at risk when this structure uncontrollably collapsed. Clients have a responsibility to appoint competent contractors to undertake hazardous work such as demolition.

“Those in control of demolition have a responsibility to plan demolition work and to devise a safe way of working that protects both the workers and members of the public.

“The job could have been safely carried out by simply undertaking the demolition behind a substantial hoarding.”