A worker died and two others were badly injured at a construction site in Putney, when a temporary platform collapsed. 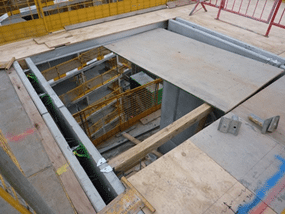 Southwark Crown Court heard how, on 29 October 2012, a carpenter and a steel-fixer had been standing on a temporary wooden platform above a stairwell opening on the 9th floor of a construction site when the platform suddenly gave way beneath them. They fell around sixteen metres down the opening. Both men landed on the partly-constructed concrete staircase below, where the carpenter sadly sustained fatal injuries. The steel-fixer survived the fall but was so seriously injured that it took almost 3 years for him to recover sufficiently to be able to return to work.

An engineer’s assistant who was working in the stairwell on a lower level was hit by falling debris and also sustained serious injuries.

An investigation by the Health and Safety Executive (HSE) found that similar platforms had been constructed on other floors throughout the construction site, by using timber joists supported by unsuitable joist hangers with plywood fixed on top. The platforms, which were part of ‘temporary works’ were neither built to an agreed safe design, nor was the quality of the build checked by those in control of the site, even though they were crucial to the safety of workers on upper floors.

“The risks of falling from height are well-known, and the risk of joist hanger failure is well-documented. This tragic incident illustrates what can happen if temporary works are not properly organised. All those who have a role in planning and managing work on site must take responsibility for ensuring that serious risks are properly controlled.”

Mitchellson Formwork and Civil Engineering Limited, of Mitchellson House, Horton Trading Estate, Horton, Slough, Berkshire, the contractors responsible for constructing the platforms, pleaded guilty to breaching Regulation 13(2), of the Construction (Design and Management) [CDM] Regulations 2007, and was fined £400,000 and ordered to pay costs of £14,935.54.

RGF Construction Limited, of Howard Road, Seer Green, Beaconsfield, Buckinghamshire, a site agent who assisted with managing the work, was found guilty at an earlier hearing on 4 July 2016 of breaching Regulations 13(2), and 28(2) of the Construction (Design and Management) Regulations 2007. The company was fined £20,000.