An engineering company in Worcestershire, has been fined more than £380,000 for safety failings. 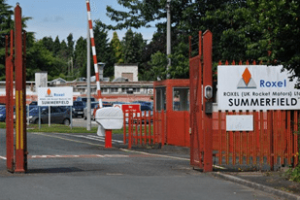 Worcester Crown Court heard how an employee of Roxel (Rocket Motor) Limited was inspecting a rocket motor for damages received during the manufacturing process.

He used a fibre optic light to illuminate a conduit on the charge, and the propellant ignited by the heat from the light. Luckily no one was injured.

The charge burned for about 10 seconds sending flames and gases out of both ends of the charge until it burnt out. The room where the ignition occurred was set on fire. Also present in that room were four explosives charges and a Vulcan rocket motor, there was also a further 230kg of explosive charges in the magazine that is next door to the room, which still had the magazine doors open. Two employees were working in the room and an agency worker was present in the magazine when the ignition occurred. It was foreseeable that other propellants and charges in the room and magazine could have been ignited by the Titus charge and subsequent fires.

At the time of the incident the company did not know what explosives were in the building and could not inform the emergency services as to the level of risk. The potential to cause harm was great due to excessive explosives material being present in the building and the number of people present nearby including the emergency services. It took the company well over an hour for the them to understand the hazards present and react to the situation, not even the on-site emergency plan was made available to the Fire and Rescue Services, meaning they were put at risk when they should not have been. Again it was good fortune that the fire did not escalate and cause harm to the people in the area.

An investigation by the Health and Safety Executive (HSE) into the incident which occurred on 16 November 2012 found that there was a lack of assessments of the risks and no safe system of work in place. The emergency plan was not implemented.

Roxel (UK Rocket Motors) Limited, of Summerfield Lane, Summerfield, Kidderminster, Worcestershire, pleaded guilty to breaching Sections 2(1) and 3(1) of the Health and Safety at Work etc. Act 1974, and Regulation 12 of the Control of Major Accident Hazards 2015, and was fined £386,000 and ordered to pay costs of £60,000.