A Plymouth company has been fined £500,000 after an employee suffered fatal injuries when a stack of boxes of frozen fish fell on him. 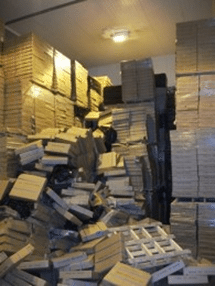 Tomas Suchy, 22, an employee of Interfish Limited, was helping to clear up a fallen stack of frozen fish boxes in one of the cold store areas when there was another fall of stock which struck him. He received multiple and severe injuries which proved fatal.

An investigation by the Health and Safety Executive into the incident, which occurred on 18 October 2013, found there was no safe system of work or instruction to staff on how pallets should be stored. There was no written procedure for dealing with falls of stock when they occurred.

Interfish Limited, of Wallsend Industrial Estate, Cattedown Wharves, Plymouth, pleaded guilty to breaching Section 2(1) of the Health and Safety at Work etc Act 1974. At Plymouth Crown Court today, it was fined £500,000 and ordered to pay costs of £24,800.

“Safe stacking of stock is a cross-industry necessity and can often be overlooked when considering safe systems of work. Duty holders need to ensure that they are stacking safely and that they have a plan for dealing with any unforeseen circumstances such as a fall of stock.”