A scrap metal firm and its director have been sentenced after a Manchester worker suffered severe injuries to his left arm when it became stuck in a forklift truck.

The worker, aged 30, from Levenshulme remained trapped for over two hours while the emergency services tried to free his arm from the vehicle’s mast at Levenshulme Trading Estate, Printworks Lane on 8 November 2013. 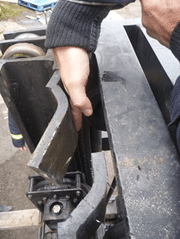 The gap in which the injured man’s arm was trapped

Ultimate Traders Ltd and company director Nasir Rashid were prosecuted by the Health and Safety Executive (HSE) after it emerged he had been told to stand on the forks on the truck to help move scrap cars into the back of a shipping container.

Manchester Crown Court heard that Mr Rashid, aged 36 from Greenford in London, had been driving the forklift truck and that the scrap cars were due to be exported to Pakistan where the metal would be sold.

The worker suffered severe crush injuries when his arm became trapped and it took the combined effort of three fire crews, a specialist major rescue unit, two air ambulances, a medical team from Manchester Royal Infirmary and three ambulance crews to rescue him.

He sustained nerve damage to his left arm which makes it difficult for him to grip or lift items, and was in hospital for nearly two months. He still needs to visit Manchester Royal Infirmary for treatment and has been unable to return to work due to the extent of his injuries.

The court was told the company failed to report the incident to HSE for nearly three months, despite being told on several occasions that this was a legal requirement.

Nasir Rashid, of Bracewell Avenue in Greenford, was sentenced to six months imprisonment suspended for 18 months and ordered to pay costs of £750 after pleading guilty to a breach of Section 2 (1) of the Health and Safety at Work etc. Act 1974.

Ultimate Traders Ltd, of Bridgewater Road in Wembley, was given a nominal fine of £2 after discussion concerning the company’s finances. The firm pleaded guilty to breaches of Section 2 (1) of the Health and Safety at Work etc. Act 1974 and Regulation 4 (2) of the Reporting of Injuries, Diseases and Dangerous Occurrences Regulations 2013.

“The worker remained trapped for over two hours while the emergency services battled to cut him free, but this incident could easily have been avoided.

“Ultimate Traders and Nasir Rashid had a legal responsibility to make sure the worker stayed safe, but instead he was instructed to climb onto the forks of a forklift truck to move scrap cars into a container. He suffered severe injuries as a result which will affect him for the rest of his life.

“Workers should never be allowed to stand directly on the forks on a forklift truck because of the risk of them falling or being injured by moving parts on the mast. This case should act as a warning to firms that they will find themselves in court if they do not take the safety of workers seriously.”