An employer has been fined after a worker died after inhaling fumes while cleaning a chemical stripping paint tank at a motor vehicle repair company. 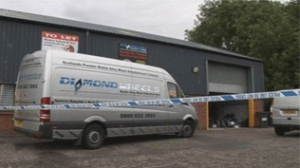 Picture from BBC From the section Tayside and Central Scotland

These duties included collections and deliveries, removing and replacing tyres, and moving alloy wheels into, and out of, the chemical stripping tank.

The court heard Mr Conway, was overcome by dichloromethane vapour while attempting to remove stripping debris from within the chemical stripping tank and died as a result of his exposure to those vapours.

Mr Conway, a 33-year-old father of two, was sent in to remove debris created from the process of stripping wheels using a chemical known as EFX Strip.

That chemical contains methlyene chloride, methanol and hydrofluoric acid and is described as a “highly volatile organic compound”.

Mr Conway went in to the tank wearing trainers, tracksuit bottoms, a t-shirt and a fleece.

He was not provided with overalls or any other protective clothing – and wore a mask that did nothing to protect him from the toxic fumes let off by the chemicals.

“Mr Conway was found wearing the face mask, kneeling inside the stripping tank. He was slumped against the side of the tank and appeared to be unconscious.”

Mr Marr and another colleague removed Mr Conway from the tank and tried to resuscitate him. He was later pronounced dead.

A subsequent post-mortem examination found he had suffered chemical burns to his thighs, knees, shins and feet “typical of chemical burns from contact with hydrofluoric acid”.

Pathologists concluded he had died from inhaling industrial paint stripper.

Mr Anderson said: “I express publicly in open court that Mr Conway’s tragic death is genuinely and deeply regretted by all associated with the company.”