Chemical firm in court after explosion blows hole in factory

A chemical firm has been fined after a hydrogen explosion blew a vessel lid through a factory roof, leaving a worker with minor injuries. 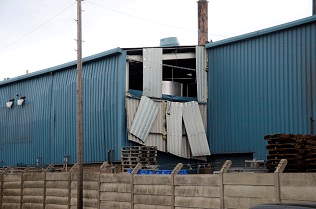 Catalloy Ltd was prosecuted by the Health and Safety Executive (HSE) following the incident at its plant on Moss Bank Road in Widnes on 25 November 2011.

Warrington Crown Court heard on Thursday 24 September, that the company, which produces metal catalysts used by the pharmaceutical and petrochemical industries, had made a modification to one of its reactors.

The explosion occurred on the first day of production following the modification and blew the lid and other equipment through the corrugated panels on the roof of the factory and into a neighbouring car park. A worker also suffered cuts to his hand and back.

The HSE investigation found the firm had fitted a new seal on the reactor to prevent air getting in, but had not properly considered the risks of the increased pressure inside the

equipment during the production process.

Catalloy Ltd was fined £80,000 and ordered to pay £80,000 in prosecution costs after pleading guilty to two breaches of the Health and Safety at Work etc Act 1974 by failing to ensure the safety of workers.

“Catalloy deals with potentially dangerous substances every day and so it’s vital nothing is left to chance when it comes to the safety of its workers.

“The company should have carefully considered the risks of sealing the reactor but instead it continued with the production process and there was a major hydrogen explosion as a result.

“Luckily, only one worker suffered minor injuries in the blast but the consequences could easily have been fatal.”

Section 2(1) of the Health and Safety at Work etc Act 1974 states: “It shall be the duty of every employer to ensure, so far as is reasonably practicable, the health, safety and welfare at work of all his employees.

Section 3(1) states: “It shall be the duty of every employer to conduct his undertaking in such a way as to ensure, so far as is reasonably practicable, that persons not in his employment who may be affected thereby are not

thereby exposed to risks to their health or safety.”