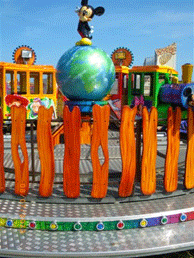 A three year old child suffered a serious injury to his hand when it was caught between the wheels and the track of a children’s fairground train ride at an annual event called the ‘Shiremoor Treat’.

North Tyneside Magistrates’ Court heard how on the 6 July 2013, the three year old child was visiting the fairground with his grandmother and cousins.

He had been on the bouncy castle and was sitting on the steps of the ‘Mickey Express’ train ride to put on his shoes. While his grandmother was tying his laces he leant back and stretched his arms behind him. The train started up and ran over his fingers. The child’s fingers required surgery and stitches but he made a good recovery.

“This was an entirely preventable accident. The risk of trapping was obvious and should have been identified by the ride operator in his risk assessment. The provision of a fence around the ride was a simple precaution that would have prevented the accident.”