A Gloucestershire-based woodwork firm was fined after a worker lost three fingers whilst using a table saw. 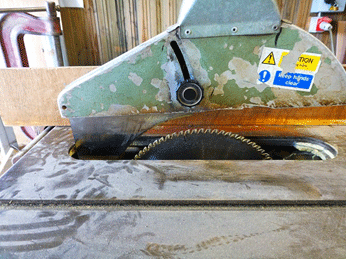 Stroud Magistrates Court heard that on the 22 September 2014, agency worker, Egidijus Norkus, 44, was instructed to use the table saw by his supervisor to cut tongue and groove boards being used to make bird table bases. Mr Norkus injured his left hand on the table saw, losing the top of his middle, ring and little fingers.

The investigation, carried out by the Health and Safety Executive, found that Severn Valley Woodworks Limited had not trained Mr Norkus in a safe system of work for making the products, failed to supervise the work and found that the table saw was not effectively set up.

Severn Valley Woodworks Limited was fined £8,000 after pleading guilty to breaching Section 3(1) of the Health and Safety at Work etc Act 1974 and was ordered to pay £1,142 in costs.

“This was an unfortunate incident that could have been avoided if the company had effectively supervised workers using dangerous machinery.

“The woodwork industry has a high accident rate, most of which are caused by contact with moving machinery. Employers need to ensure that machines are effectively guarded and workers are adequately trained and supervised.”