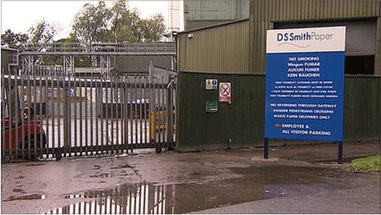 Photo courtesy of the BBC

John Stoddart, 42, who lived in Cullompton, was attempting to smooth out felt on a conveyor at the Higher Kings Mill in the town, when he was pulled into the machinery causing fatal injuries on 24 September 2011.

The court heard that Mr Stoddart, who was the company’s operations manager, was trying to identify a problem that was causing creases in the large rolls of industrial paper being produced.

Following the practice of some other workers in the factory when similar situations occurred, he climbed onto a work platform to check if the creases were caused by problems on a large, moving felt belt, used to squeeze water out of the pulp mixture.

Although no-one saw what exactly happened to Mr Stoddart, it is likely he was dragged onto the felt belt which then ripped and he fell into the machinery below, causing fatal crush injuries. He was pronounced dead at Royal Devon and Exeter hospital, having been taken there by an ambulance.

HSE’s investigation found the company had failed to place any guard around the belt, and did not have a suitable risk assessment for work which needed to be carried out to find the cause of creases and for working on the gantry.

“DS Smith’s failure to guard a dangerous piece of moving machinery tragically cost Mr Stoddart his life and has left his family without a husband, father and brother.

“Potentially dangerous machinery should always be guarded and turned-off when workers need access to repair faults.

“A proper risk assessment would have highlighted these dangers and established safe practices for staff instead of putting their lives at risk.”