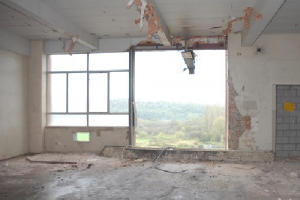 Building contractor, Euro Dismantling Solutions Limited was fined for safety failings after a man lost his life during demolition works.

He was using the opening as part of a ‘drop zone’ to drop large fibreglass tanks that had been cut in half to the ground below. The opening was not properly protected to prevent the machine falling from the building and the tank got stuck on the digger and pulled the vehicle with it. Mr Stacey died from his injuries.

Euro Dismantling Solutions Limited (now in liquidation) pleaded guilty to Section 3(1) of the Health and Safety at Work etc Act 1974 after they failed to ensure the safety of James Stacey whilst carrying out demolition work. On Wednesday 1 July, they were fined £80,000.

Site Supervisor, Paul Ben Priestley (54) was also charged under Section 7 of the Health and Safety at Work etc Act 1974 after failing to take reasonable care. He denied the charges but was sentenced at Bristol Crown Court on 21 May 2015 and was given an 12 month custodial sentence, suspended for two years and costs of £7,500.