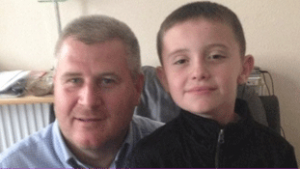 Philip Grace, pictured with his son, said the injury had affected his ability to play sports with his family – Photo from BBC

Philip Grace, age 43, of Liverpool, lost part of his right arm after the incident at Recresco Ltd’s Manisty Wharf site in Ellesmere Port, Cheshire, when it became trapped in a conveyor belt he was maintaining.

Liverpool Crown Court heard today (18 June) how, on 26 January 2014, Mr Grace’s safety glove got caught on a moving conveyor belt on the glass sorting machine on which he was carrying out maintenance.

His arm was pulled into the machine and severed from above the wrist and attempts to reattach his hand were unsuccessful. The extensive surgery Philip Grace has undergone to repair his arm has left the father of one with limited mobility and he lives in constant pain.

An investigation by the Health and Safety Executive (HSE) found multiple failings by the company, which put their own and agency workers at risk. The company had failed to assess the risks associated with working on moving conveyor belts as well as ensuring the machinery across their site was properly guarded.

The company did not have a safe system of work in place and there was insufficient information, instruction or training relating to the conveyors, which routinely exposed their workers to dangerous situations.

“Philip Grace’s life has been deeply affected by this entirely preventable incident. The need for safe systems of work, correct guarding, staff being trained and risk assessments being carried out are the basics of health and safety for a company like Recresco Ltd.

“Companies must recognise the need for proper safe systems of work, guarding and training to protect workers who are operating or maintaining heavy machinery like the conveyor belts used in the recycling industry.”