Four members of a Derbyshire farming family have been prosecuted for serious safety failings, after a three-year-old boy, was injured during harvest time.

Ivan and Jane Hammersley and their sons, Christopher and Daniel Hammersley, appeared before Southern Derbyshire Magistrates Court on Thursday 7th May following the incident at White House Farm, Offcote, near Ashbourne, on 21st September 2013. 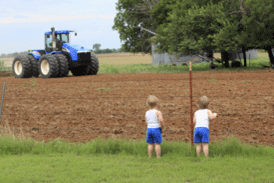 The court was told it was the second incident involving a child at the farm. In 2009, a two-year-old boy was killed when he was hit by a tele-handler.

In the second incident, the toddler, who cannot be identified, was on the first floor of a barn with Christopher Hammersley, who was moving grain around using a pair of augers (a rotating screw inside a tube), when his foot was pulled into one.

He suffered deep lacerations to the top of his left foot which required plastic surgery and several nights in hospital.

HSE’s investigation found the boy had accessed the first floor of the barn via a ladder. As well as the dangers this posed, there were also open edges on the first floor, poor electrical insulation and significant levels of grain, dust and noise. The auger had a guard but such guarding is not designed for a child’s dimensions.

All four defendants pleaded guilty to breaching Section 3(2) of the Health and Safety at Work etc Act 1974.

Jane Hammersley, 66, was given a two year conditional discharge and ordered to pay costs of £500.

“Agriculture has one of the highest fatal incident rates of any industry. It is also the only high-risk industry that has to deal with the frequent presence of children. Farms are homes as well as workplaces.

“Children should be kept in a safe place, such as a dedicated play area. Alternatively if they are observing farm work, it should be at a safe distance with a competent adult providing supervision, and that adult must not be the person undertaking the work task.”

Section 3(2) of the Health and Safety at Work etc Act 1974 states: “It shall be the duty of every self-employed person to conduct his undertaking in such a way as to ensure, so far as is reasonably practicable, that he and other persons (not being his employees) who may be affected thereby are not thereby exposed to risks to their health or safety.”