A worker suffered fractures to his back, hip and leg after he was knocked over by a four-tonne piling hammer when it broke free while being lifted into position, a court has heard. 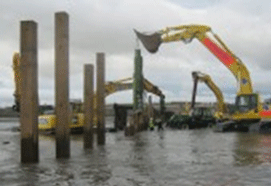 Two firms fined after worker seriously injured. Scene of the incident near Hartlepool

Eric Wilson, 62, of Hartlepool, was controlling the piling hammer, suspended from an excavator, during work to renew a sewage outfall across the beach at Burn Road, Hartlepool when the incident happened on 16 September 2012.

He was standing in seawater, around one metre deep, using the hammer to drive timber piles into the beach. But as the hammer was moved from one pile to the next, the sling supporting it broke  and the hammer fell, knocking him down into the water.

He suffered fractures to his vertebra, pelvis and left thigh as well as muscle damage to his back, shoulder and knee and was in hospital for 11 days. He has been unable to return to work and although he can walk unaided he still suffers persistent pain and has had to move to a bungalow to avoid stairs.

Hartlepool Magistrates’ Court was told on Monday 20 April that an investigation by the Health and Safety Executive, found that Mr Wilson’s employer Southbay Civil Engineering Ltd, a specialist civil engineering contractor, had failed to properly plan, supervise and carry out the lifting operation in a safe manner.

The investigation also found that principal contractor for the project, Costain Ltd, had failed to properly manage and monitor this phase of the work.

The court was told a smaller hammer, which was easily lifted into position by the excavators on site, had been identified when the work was initially planned. However, the smaller hammer was found not to be powerful enough so a larger hammer was brought in.

The additional weight was not an issue for the excavators, but the extra length led to problems when lifting the hammer over some piles, which led to unsafe working practices being used, in which the slings were stressed over the sharp edges of excavator buckets, in an attempt to gain extra height.

This was what caused the sling to break, and the hammer to fall. This could have been avoided if the work plan had been changed when the larger hammer was introduced, and a suitable lifting machined used.

Costain Ltd, of Vanwall Business Park, Maidenhead, Berkshire, was fined £19,000 and ordered to pay £14,895.25 costs after pleading guilty to breaching Regulation 22(1)(a) of the Construction (Design and Management) Regulations 2007.

Southbay Civil Engineering Ltd, of The Bailey, Cumberland Road, North Shields, was fined £19,000 and ordered to pay £8,652.45 costs after pleading guilty to a breach of Regulation 8(1)(c) of the Lifting Operations and Lifting Equipment Regulations 1998.

“This worker’s injuries should not and need not have happened. Had the work plan been changed when the circumstances changed and a different hammer was brought into use, it could have easily been avoided by using a suitable lifting machine.

“Instead, a system of work evolved that was far from safe and as a result part of the sling was stretched across the sharp edge of the excavator bucket, causing it to break.

“The failures by both companies to look properly at the risks involved and then organise the lifting operation properly put staff at needless risk. This sadly led to the painful and life-changing injuries suffered by Mr Wilson.”

Regulation 22(1)(a) of the Construction (Design and Management) Regulations 2007 states: “The principal contractor for a project shall plan, manage and monitor the construction phase in a way which ensures that, so far as is reasonably practicable, it is carried out without risks to health or safety.”

Regulation 8(1) of the Lifting Operations and Lifting Equipment Regulations 1998 states: Every employer shall ensure that every lifting operation involving lifting equipment is: … (c) carried out in a safe manner.