Some of you may have seen the news reports last week, about the risks to the physical and mental health of people employed full time in offices. So this week I thought I would look at this problem and suggest ways to reduce the risks.

I also have exciting news about the CDM2015 courses we are running in April and our usual pick of last week’s HSE court cases.

Office workers – do you do enough to reduce physical and mental health risks?

It was reported in the news, last week, that office workers who spend too much time sitting down are likely to increase risks of many health problems.  So these people are being urged to move around more to reduce the risks.

But I am sat down in a warm office so that can’t be a health hazard – can it ? 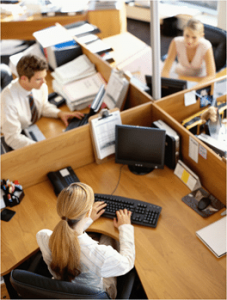 Well actually Yes it can! Sedentary lifestyles contribute to ticking time-bombs of poor health in those who are susceptible to obesity, heart disease and type 2 diabetes as well as depression, stress and anxiety – according to the British Medical Journal.

Around 45% of women and 37% of men spend 30 minutes or less on their feet. Nearly two thirds fear that inactivity would have a negative effect on their well-being, a poll of 2,000 workers by the British Heart Foundation revealed last week.

A third of those polled said they even put off going to the toilet while sitting at their desks. Those in industrial labour jobs are also at risk since some positions have been replaced by heavy machinery controlled by seated workers

The problem is then compounded by employees driving to and from work before continuing to not exert much physical energy at home by watching television and grazing on snacks before going to bed.

I go to the gym a couple of times a week so I’m ok right?

According to experts, even if an office employee is usually active, being chained to a desk for long hours is “one of the biggest challenges” in improving health as going to the gym doesn’t cancel out implications on the body and mind.

The trouble is most office workers become ‘glued’ to their screens at some point and even start to email a question to the person sitting a few desks away rather than getting up and walking over to that person to ask their question! Yes I can hear you now saying “but it’s quicker that way and I am very busy” but is it really quicker? You email over your question which the recipient needs to read before they send their reply. But this doesn’t fully answer your question so you send back another email and so on.

It would be quicker if you walked over to that person and discussed your question properly and the health benefits from that walk make it a win-win situation in every sense.

Lisa Young, project manager for the British Heart Foundation’s Health at Work programme, said: “Too many of us are tied to our desks at work, which could be increasing our risk of developing cardiovascular disease.”

Dr Mike Loosemore, head of exercise medicine at University College Hospital, told the BBC: “Inactivity and sedentary behaviour is one of the biggest challenges we have in public health today.”

“Compared with 100 years ago, our levels of activity are tiny, the number of manual jobs is continually reducing, even if you dig a road up you sit in a little tractor.”

So what should you consider doing?

Desk-based workers need to spend more time moving around every hour to energise the body and mind.

Going for short walks around the building, even if it is just to go and do a bit of filing for a while. This also gives your eyes a break from looking at the screen for a while which, in itself can help to prevent eye damage and headaches.

Try taking the stairs instead of the lifts, taking a full lunch break away from the office or doing discreet desk exercises such as described here:

As well as reducing the risk of harming your health you will find that it can also be to your company’s benefit. As squeezing in a little exercise improves concentration and actually makes you more productive