A healthcare firm and its director have been ordered to pay more than £335,000 in fines and costs after a 100 year-old resident died from injuries she sustained in a fall from a hoist at a former Bedfordshire care home. 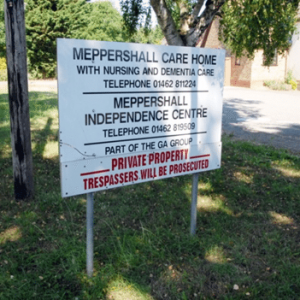 May Ward, who previously lived in Harlington, Bedfordshire, was being moved by carers at Meppershall Care Home, on Shefford Road, Meppershall, when the incident occurred on 28 August 2010.

The owners of the nursing home, GA Projects Limited, and its director, Mohammed Zarook, were both sentenced today (27 March) after an investigation by the Health and Safety Executive (HSE) established that her death could have been prevented had a better system for handling and moving residents, supported by appropriate staff training, been in place

Luton Crown Court heard (27 March) that Mrs Ward fell on 27 August 2010 as she was being moved by two carers between a chair and a bed using a hoist. She suffered multiple fractures when she hit the floor, including her skull, hip and knee, and died at Lister hospital in Stevenage the following day as a result of her injuries.

HSE established that her two carers had been employed by GA Projects for less than a year at the time of the incident. The sling used to move Mrs Ward was very complicated to fit correctly and the carers were given no training in how to safely use the sling. The sling was also not the one recommended by Central Bedfordshire Council as being suitable for Mrs Ward’s medical conditions.  Mrs Ward was therefore not securely positioned within the sling and when she moved herself forwards, she fell out, hitting the floor.

The court was told that there was a history of serious safety breaches at Meppershall. HSE served five Improvement Notices between October and December 2010 relating to deficiencies in resident handling, risk assessment, other risks to residents and a lack of competent health and safety advice.

Inspectors uncovered evidence that this was not the first of this type of incident at the home, with another resident fracturing a tibia and fibula after falling whilst being moved from her wheelchair to her armchair in September 2009. This incident had not been reported to HSE and was only discovered when HSE inspectors visited the home after Mrs Ward’s fatal fall.

At the time of May Ward’s death, GA Projects Limited owned three care homes including the one at Meppershall.  Despite having no knowledge or experience of running care homes, Mr Zarook proceeded to take vulnerable residents into his three care homes. However, there was no evidence that he had taken steps to fulfil his health and safety obligations through the provision of training, and the management of the risks most commonly associated with the care industry, including resident handling.

In addition, the Care Quality Commission (CQC) had carried out inspections at the home on several occasions prior to Mrs Ward’s death that resulted in ‘poor’ or ‘adequate’ ratings. Meppershall Care Home was closed in July 2013 following concerns raised by CQC during a further inspection.

Mohammed Zarook, of Sauncey Wood, Harpenden, Hertfordshire, pleaded guilty to breaching Section 3 of the Health and Safety at Work etc Act 1974. He was fined £150,000 and ordered to pay costs of £100,000.

“Mrs Ward’s death was a wholly preventable tragedy caused by unacceptable management failings on the part of GA Projects Ltd and Mr Zarook. They put vulnerable residents at the care home at unnecessary risk.

“Working in a care home is a specialised job, which involves dealing with vulnerable people. Care homes must ensure that they have the correct training in place for all their employees, and that they work to adequately assess and mitigate all possible risks, so far as is reasonably practicable.