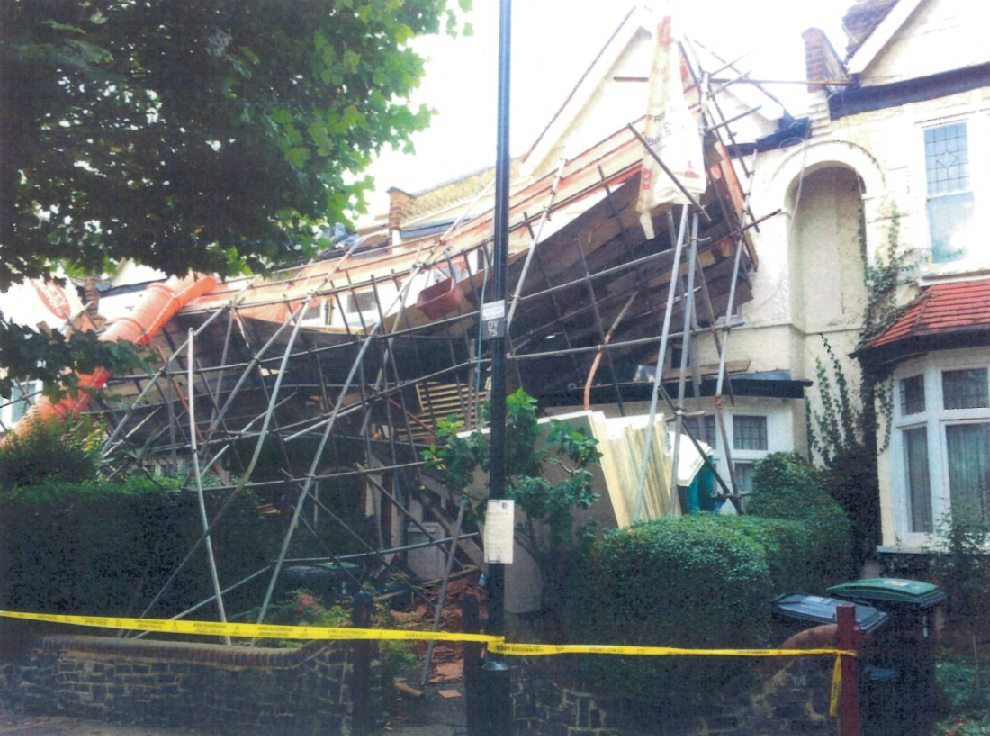 A loft conversion company has been fined for safety failings after an employee was injured in a dramatic scaffold collapse outside a property in North London.

The structure buckled, tipped towards the home it was being used to serve and bent in on itself – effectively creating a chute that sent the worker and an array of materials, including plaster boards, wood and lead rolls, crashing six metres to the ground below.

Thomas Pastura, 24, broke two ribs in the fall at the property in Danvers Road, Hornsey, on 4 October 2013, but was fortunate not to have been more seriously injured or even killed.

His employer, Acton-based Lofty Creations UK Ltd, was prosecuted yesterday (11 March) by the Health and Safety Executive (HSE) after an investigation identified clear failings with the design of the scaffold.

Westminster Magistrates’ Court heard it was being used to provide access to the roof of a traditional two-storey property where a loft conversion was underway, and had been built to reach across a ground level bay window.

HSE established that the weight of the materials on the structure at the time of collapse was between 3-3.5 tonnes – the equivalent of a transit van. This was far greater than it could safely handle and it gave way as it was simply unable to bear the load.

Magistrates were told that, as a company routinely engaged with work at height, Lofty Creations should have known the property required a scaffold built to an approved design by a specialist structural engineer.

Lofty Creations UK Ltd, of Warple Way, Acton, NW3, was fined £5,000 and ordered to pay a further £1,019 in costs after pleading guilty to a single breach of the Construction (Design and Management) Regulations 2007.

“The collapse would not have occurred had the scaffold been designed by a competent specialist to carry loads of 3.5 tonnes with an overhanging cantilever to accommodate the bay window.

“That didn’t happen and Mr Pastura suffered a painful injury as a result – although he is perhaps fortunate not to have come off a lot worse.

“Lofty Creations failed to adequately plan and design the scaffold that collapsed; failed to manage the storage of heavy materials; and ultimately failed to protect its workforce.”